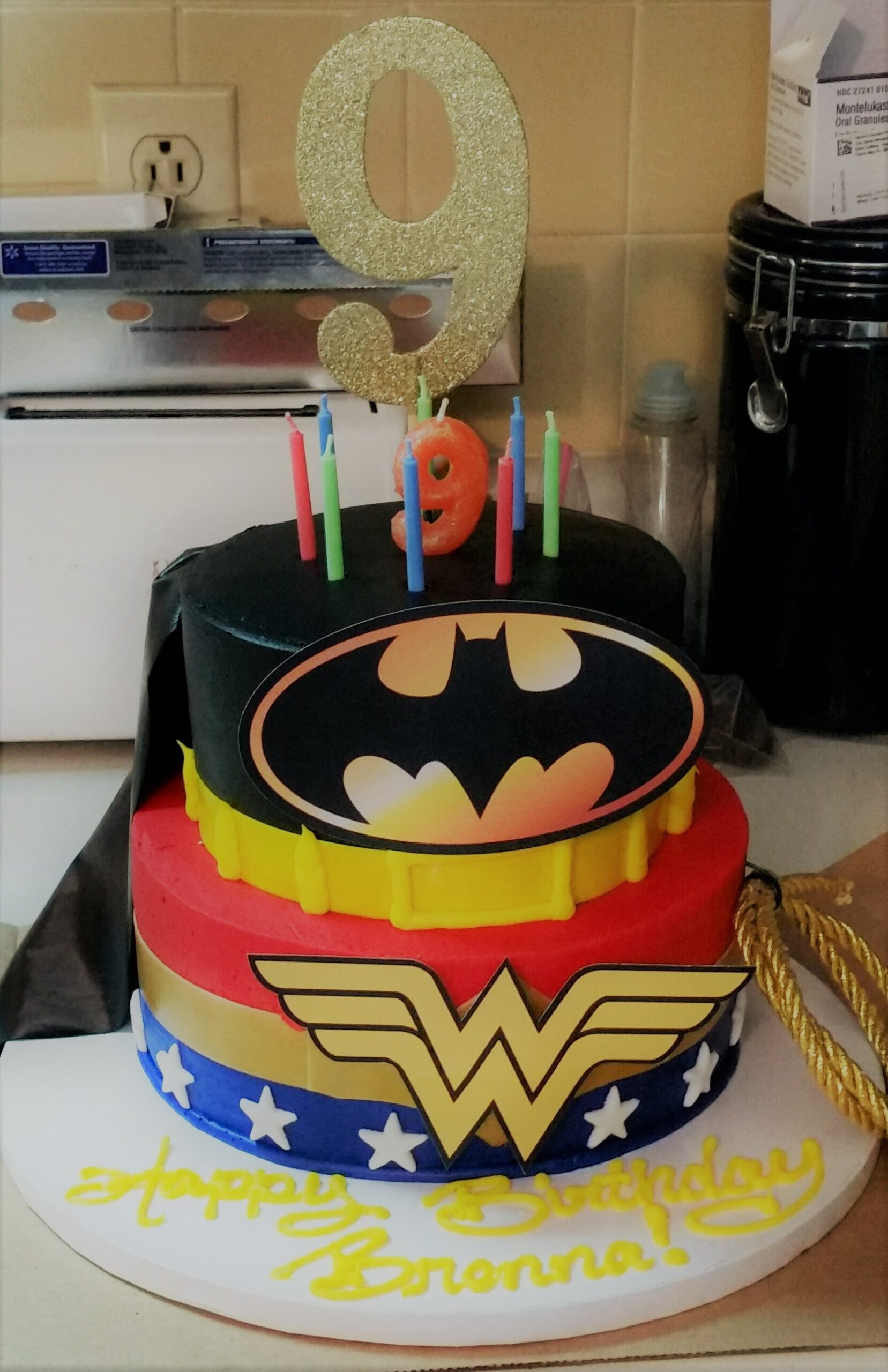 From Batman to Superman, Flash to Green Lantern, Hawkgirl to Wonder Woman, and beyond…a super hero party is still, and likely always will be, a popular choice for just about any kid.

When my daughter decided she wanted a super hero-themed birthday party this past year, I immediately began to research the various avenues I could take with my decorations. I quickly learned there are lots…and I mean LOTS…of super heroes to choose from. After quizzing my daughter a bit more, I discovered she wanted a Justice League party. That helped narrow the playing field, as it were, but not by much. I still had tons of fun ideas to choose from.

What follows is the result of many hours of super hero research and craft time. I am now fully versed in all things Justice League…whether I wanted to be or not! The end result? A gaggle of super-happy, super hero kids! 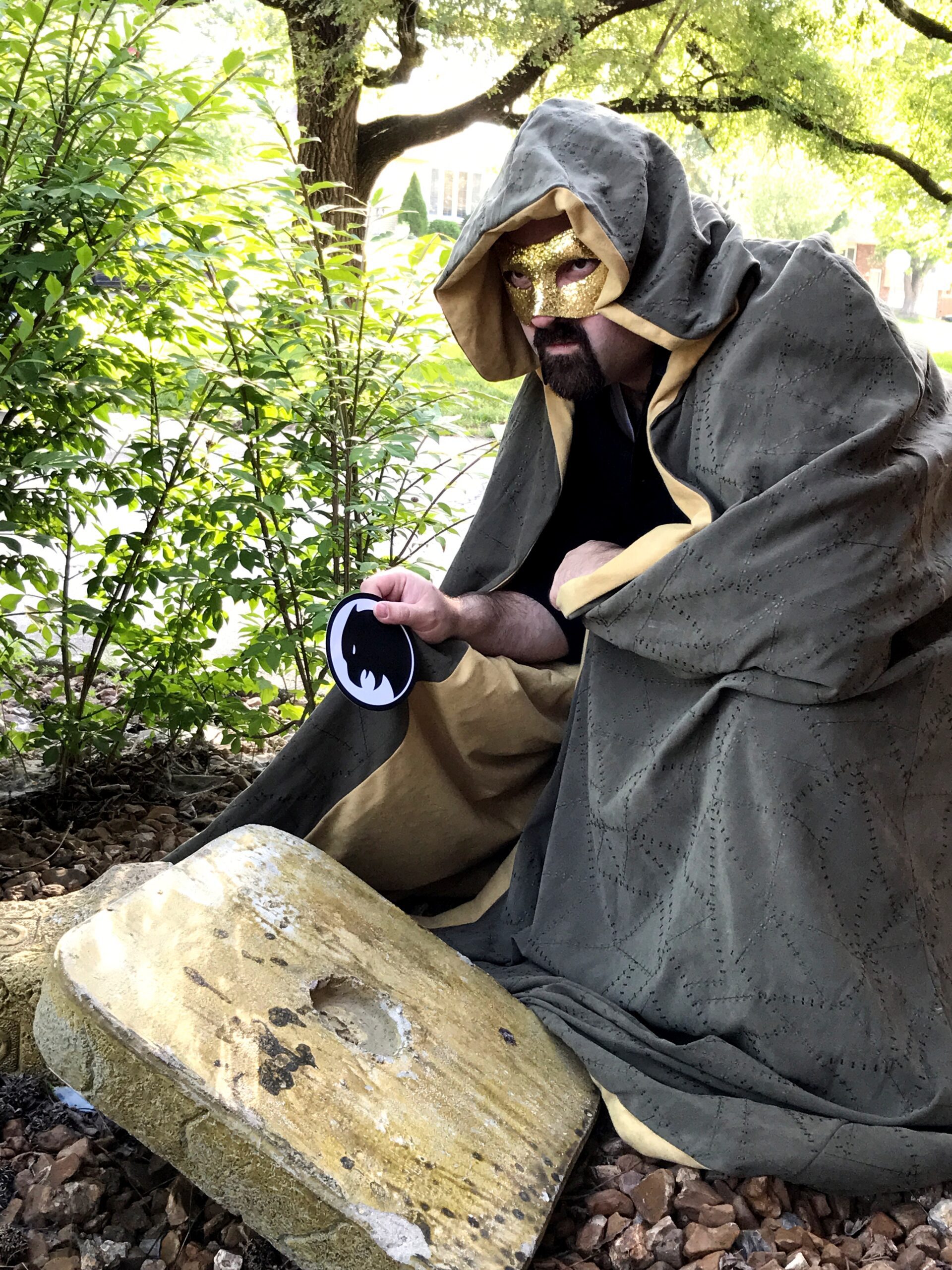 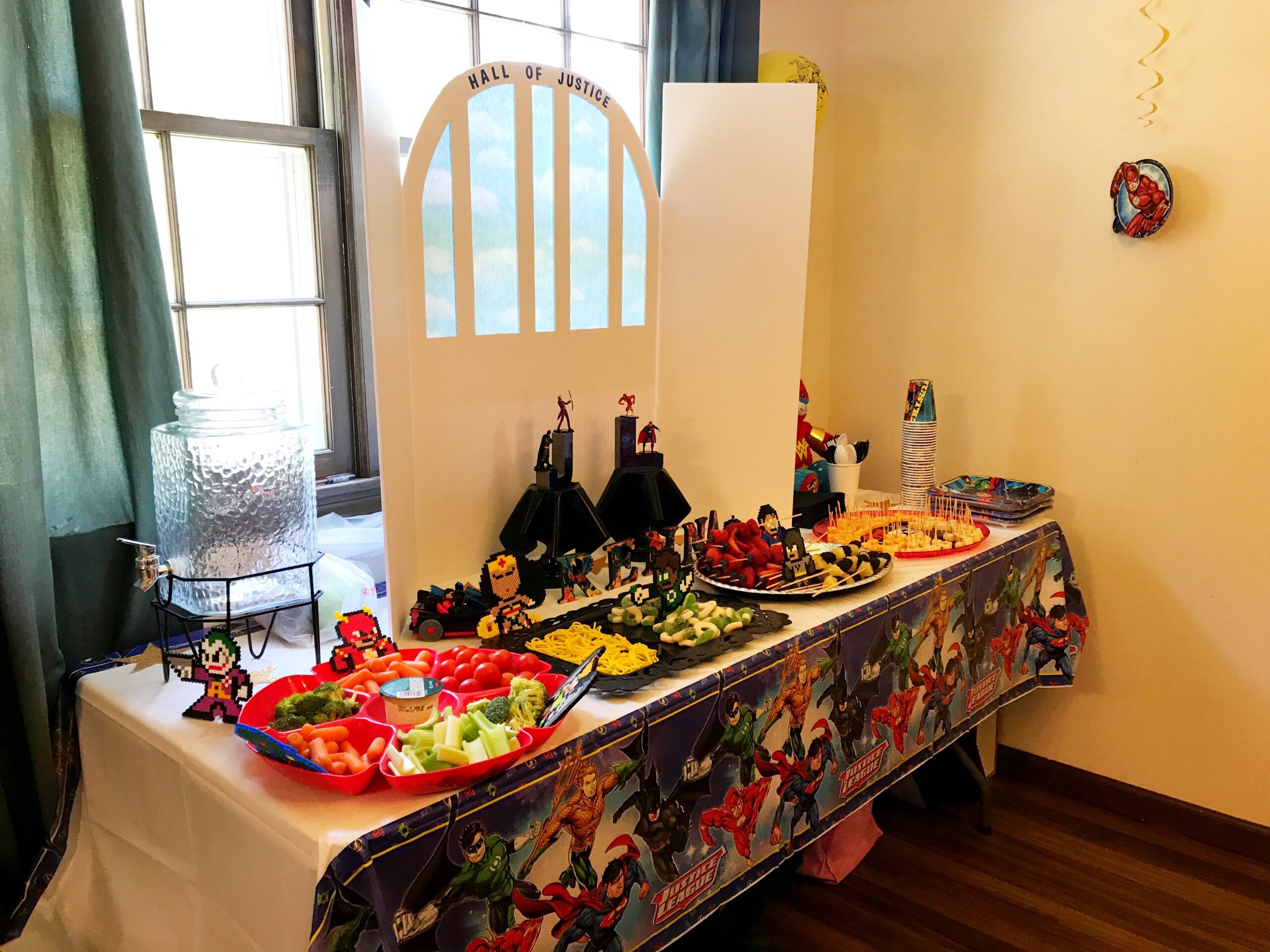 Even super heroes need to refuel every once in a while…super snacks, anyone?

I realize there’s a lot going on with this snack table. I found the tablecloth at a local party supply store and made the Hall of Justice (front facade) out of a folding display board (foam core). Each snack represented a specific super hero, and I constructed heroes to place on/in the snack trays/bowls using perler bead patterns I found online. For example, Harley Quinn was hanging out with her cheese “hammers’ (cheese squares on toothpicks), and Batman was guarding the blackberry and pineapple kabobs. There was even some tasty Joker juice (lemonade with blue food coloring added) for our thirsty heroes. 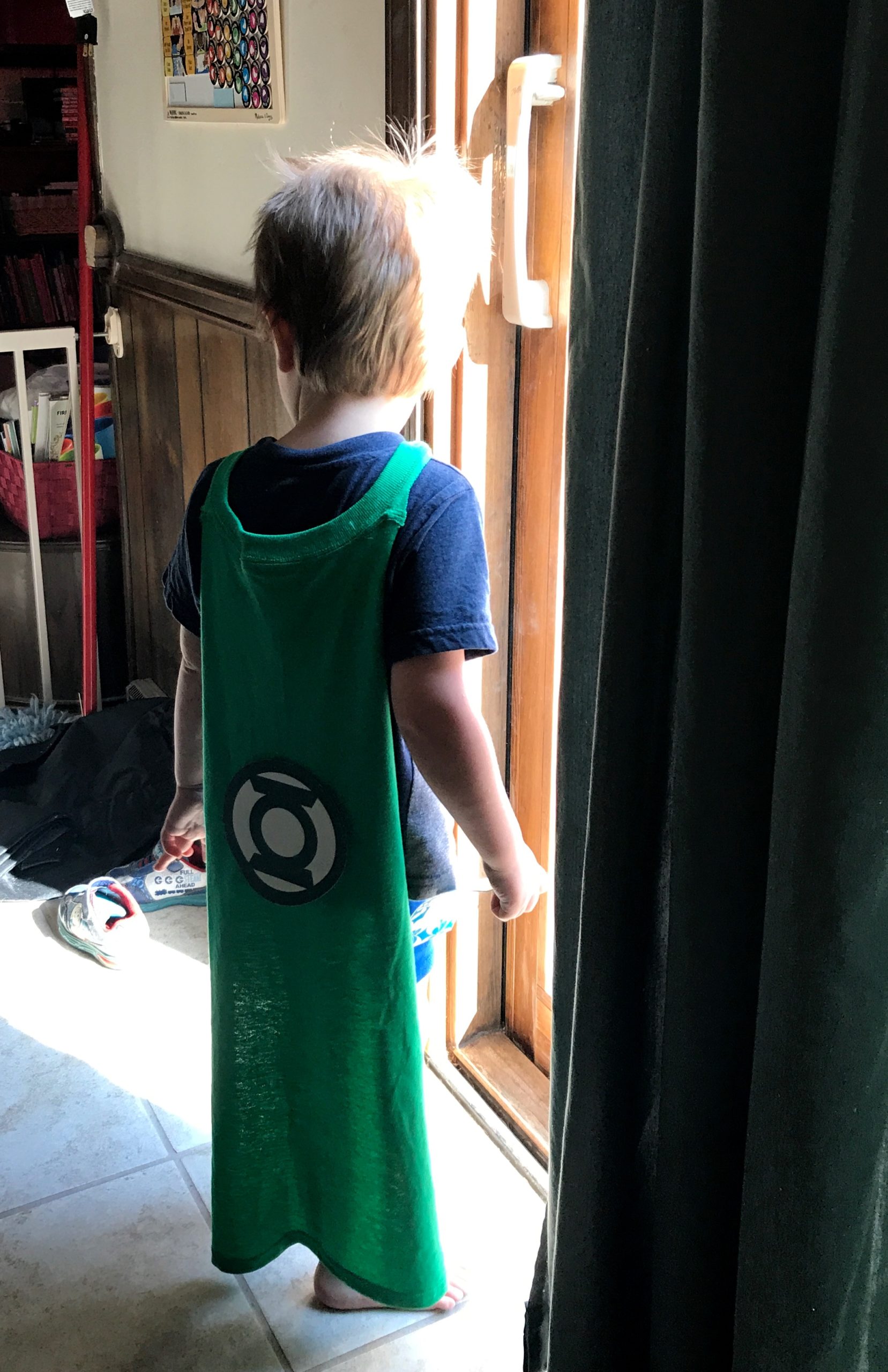 These capes were ridiculously simple to make and last much longer than any other material I could have used! Just buy t-shirts on sale at your favorite craft store, cut the front and arms off them (leaving the collar), and you have an instant cape. 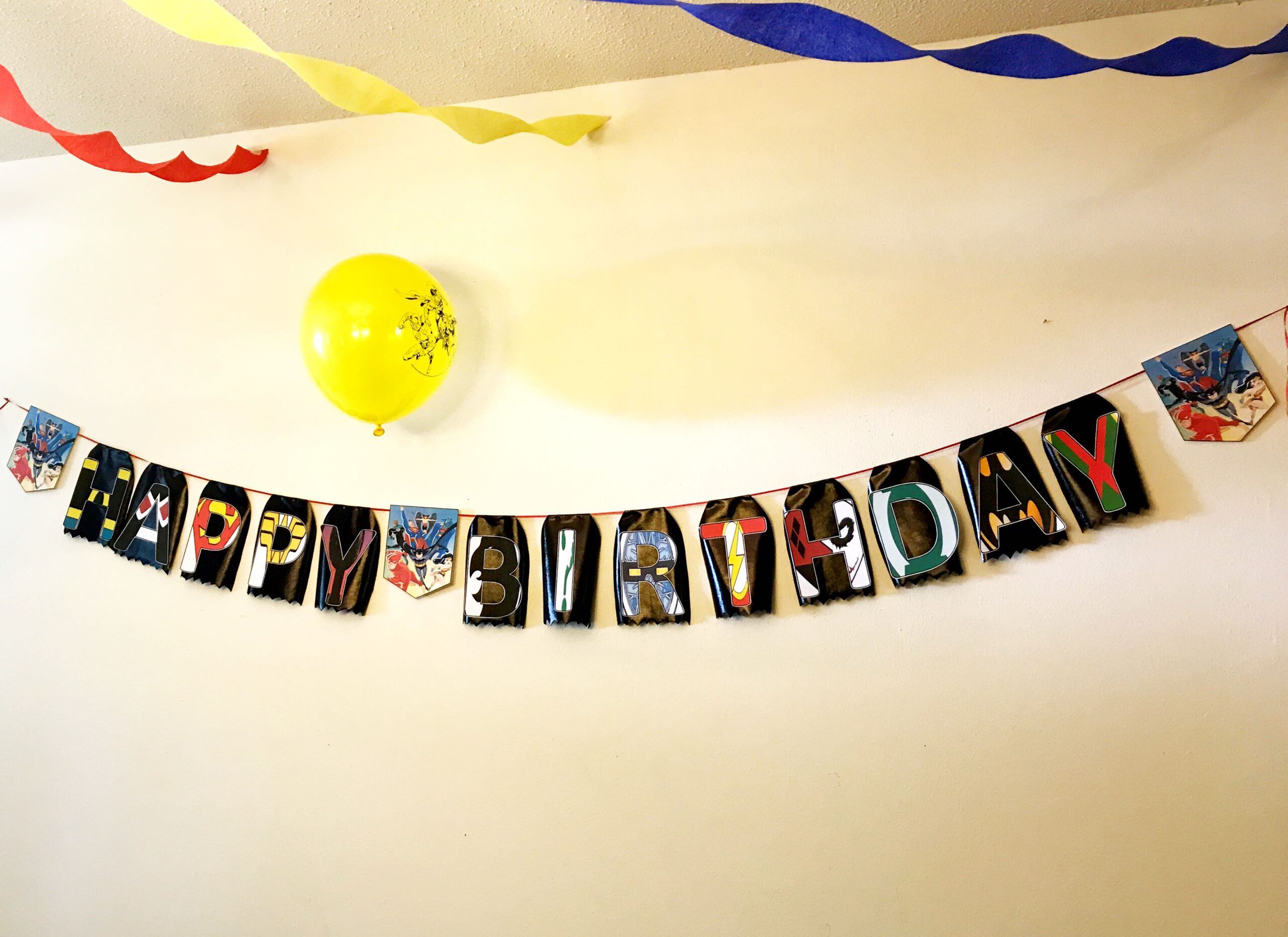 I made this Happy Birthday banner by hand using super hero and villain insignia I found online. I cut black fabric into individual capes and glued each insignia letter to a cape. This was pretty time consuming, but looked really cool once it was complete.

Any hobby store with a teacher/education section should have bulletin board paper you can use for this fun photo backdrop. You might not find the cloud paper I used, but a light blue paper would also work…just throw in a few cotton ball clouds to create a similar effect. Add boxes wrapped with single color wrapping paper and then decorated to look like buildings, and your guests can take to the skies to create this one-of-a-kind memory. 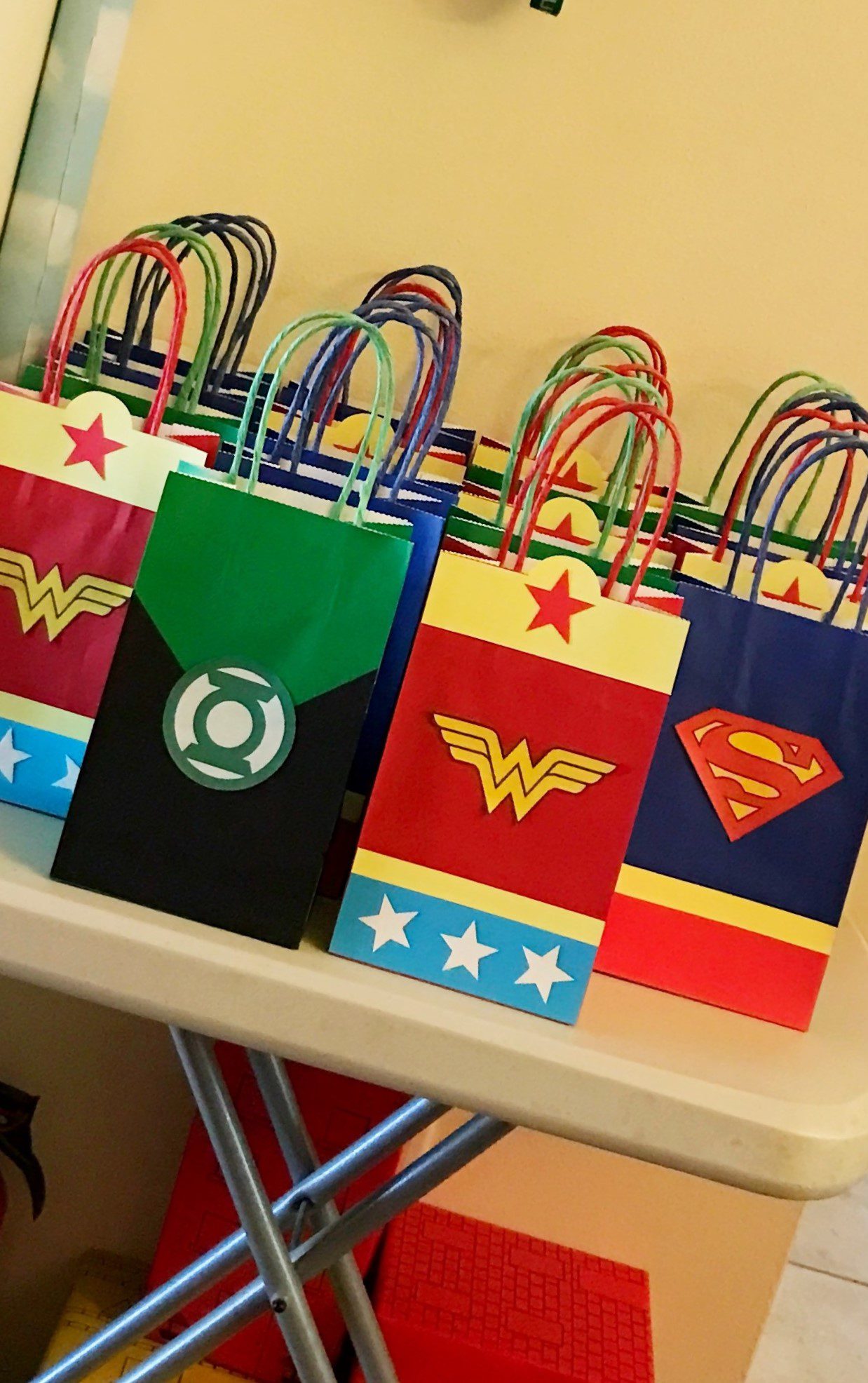 These are pretty self-explanatory. I found the designs online, made templates for the different components, cut out all the parts, and then assembled a dozen bags for my daughter’s party. Easy-peasy… 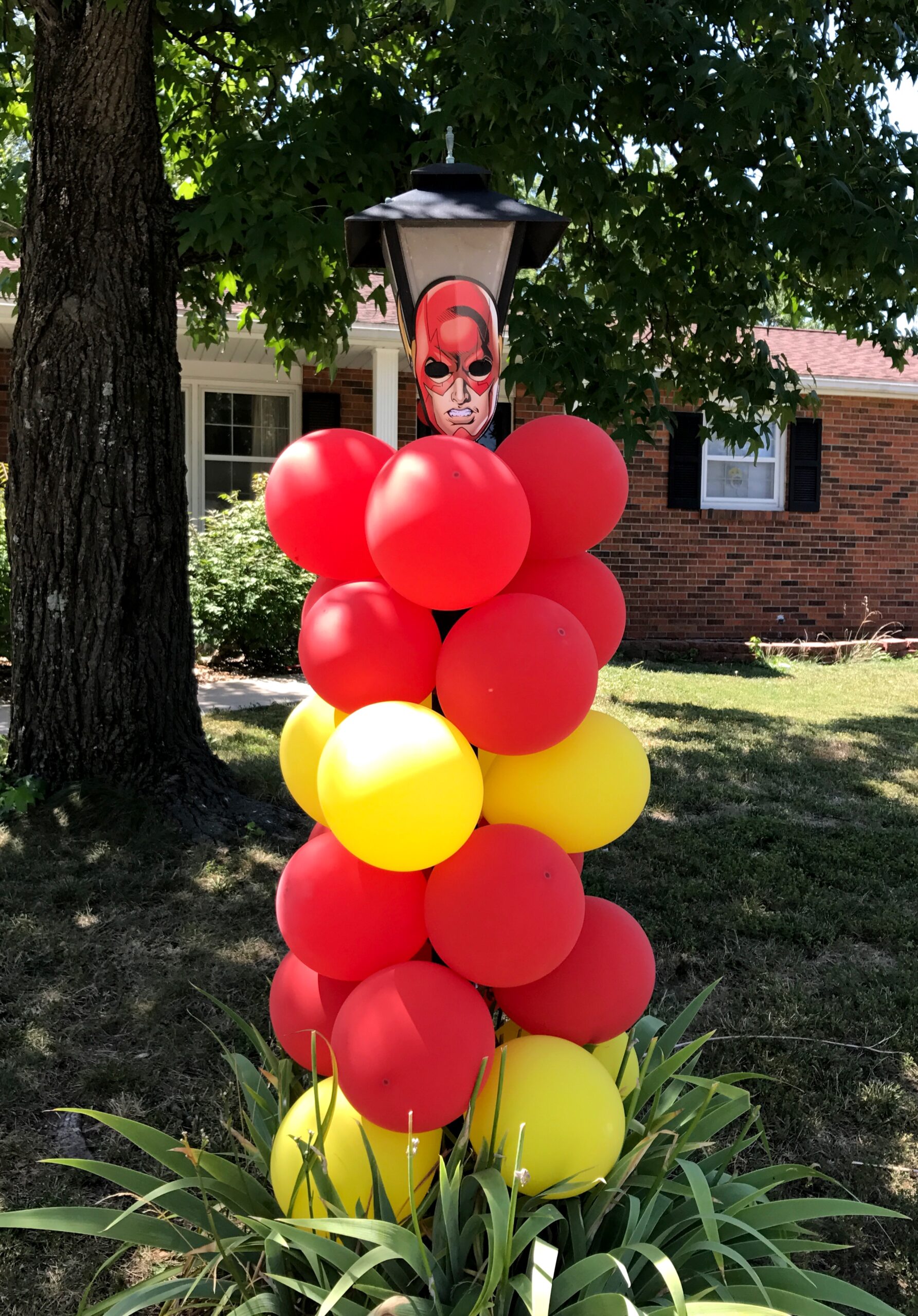 Flash to the Rescue!

Poor Flash…he seems to be stuck in the middle of our day lily patch! Well, it was either there (around the lantern post in our front yard) or in the backyard under our bird feeder (it’s sitting on top of a tall pole). That probably wouldn’t be much better.

Flash was created using red and yellow balloons taped around the post. The face is actually a mask I found at a local party supply store. 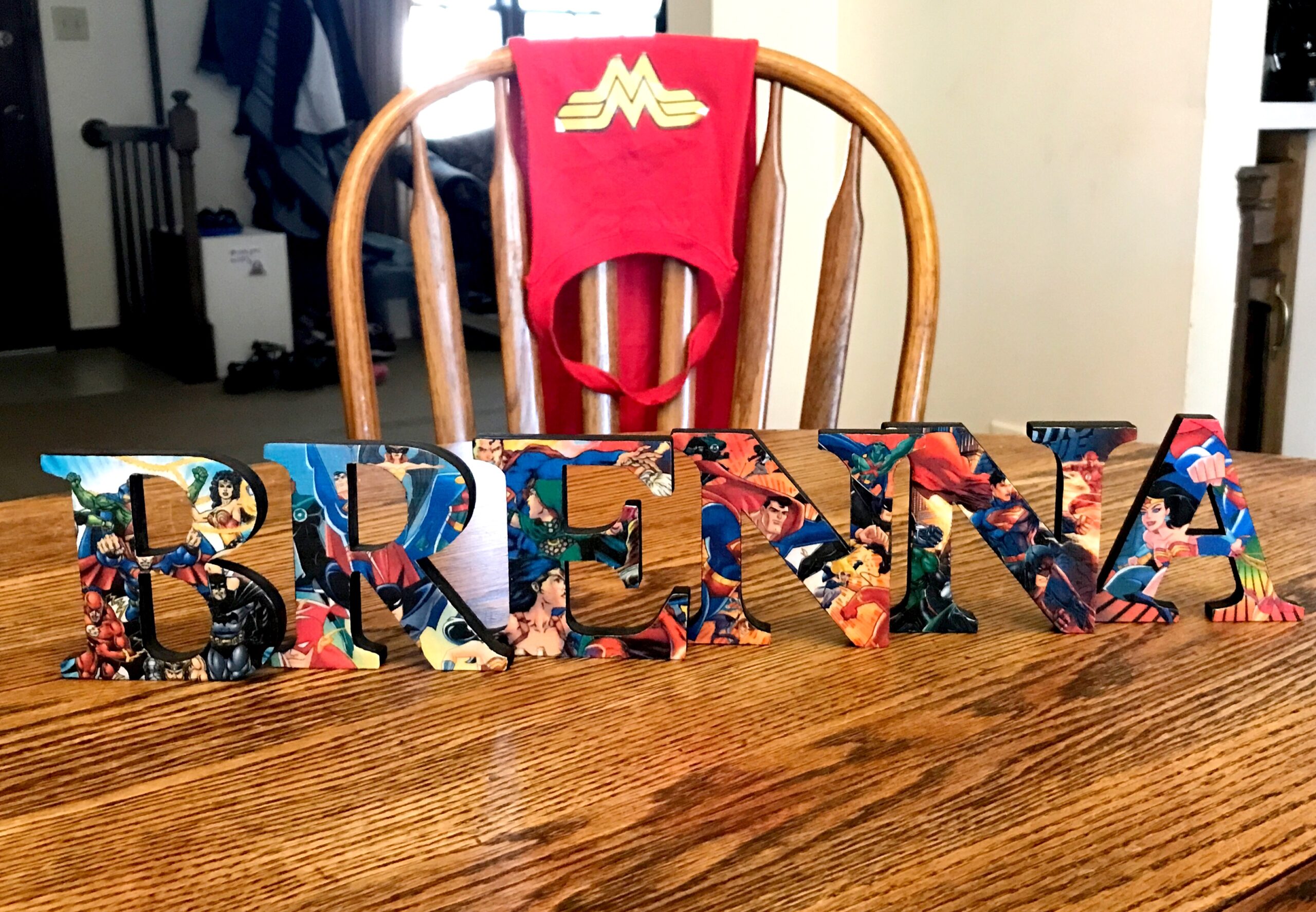 My Daughter, My Hero

If you’re good with Mod Podge and a craft blade, this will probably be pretty easy for you. It does require a bit of calculation in regards to the placement of the images, and because of that, I highly recommend going with the smaller wooden letters (I used 3-inch letters). I surfed the web for the images and printed them so they spanned a little less than half a sheet of paper (between 4X6 and 5X7 in size). I used a craft blade to cut the images and then added two layers of Mod Podge.

It was definitely time consuming, but once I finished, I was really happy with the end result. My daughter still has these letters sitting on her dresser in her bedroom. 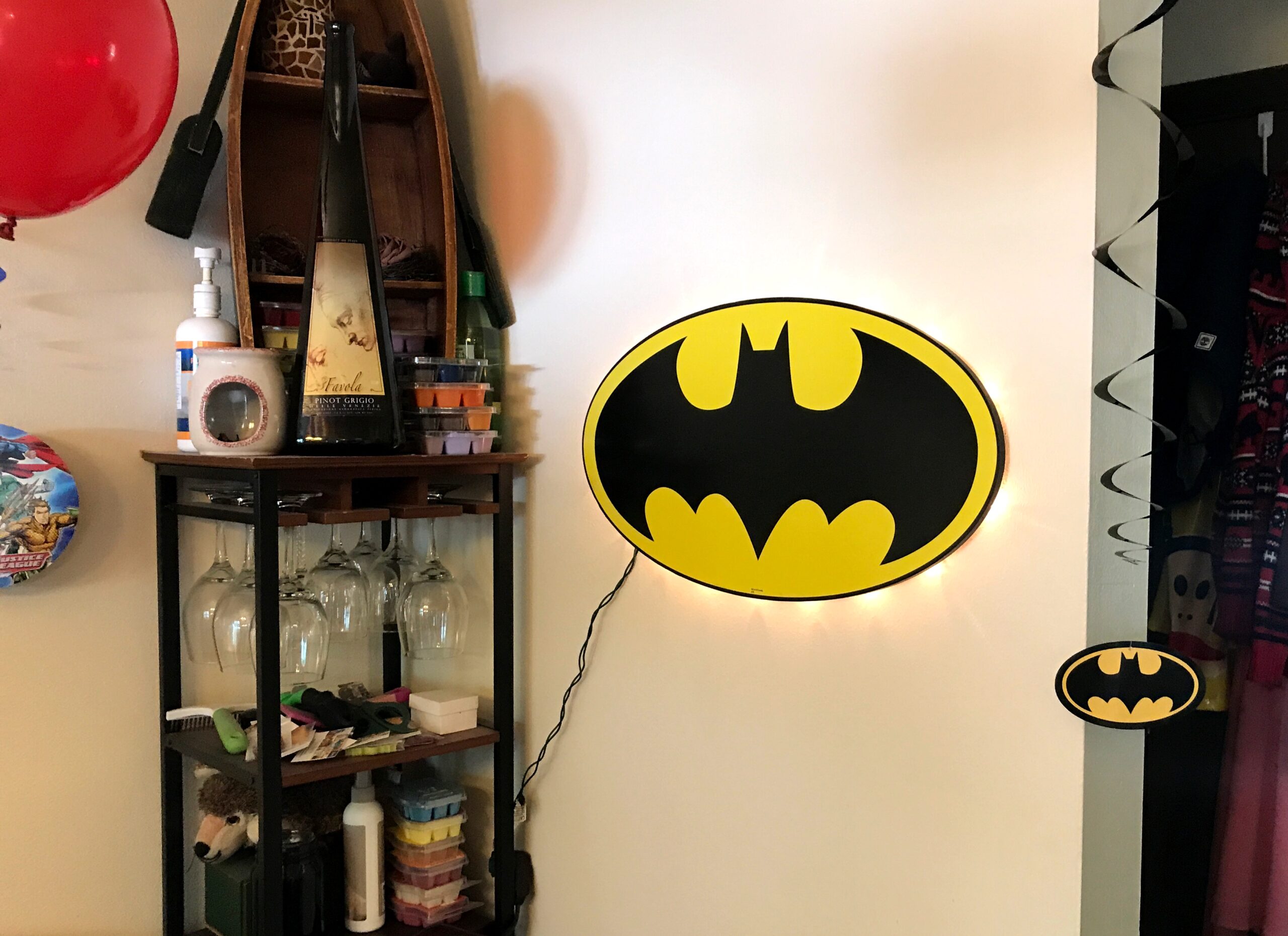 Thank goodness for hobby store sales! I found this wooden sign on sale for $17. To be honest, finding the tiny strand of white lights (20 bulbs) was harder than finding the sign. I was hoping for LED’s, but it was more important to have a strand that wasn’t too big for the sign.

I taped the lights to the back of the sign, and mission accomplished…the bat signal (sort of) was born.

The comic book laying on the table in the image to the right was created by yours truly specifically for this event. My daughter was totally surprised when our doorbell rang just as she had finished unwrapping the presents from her friends…no one was there, but she did find one final present to unwrap. And then chaos ensued…don’t worry, it was happy chaos!

I found a comic book design app online and developed a story about a villain who had stolen all of the party-goers insignia (each guest was presented with a specific super hero cape at the beginning of the party). The comic book led the children on a journey to find each of the hidden insignia. Although my intent had been for the kids to use the book as a guide (there were plenty of clues provided…check out the image above of my husband dressed as the bad guy with Hawkman’s insignia), they pretty much just ran around looking for any insignia that weren’t well hidden. Yep, chaos.

Once they had collected all the insignia, however, they discovered that one was missing: Wonder Woman’s (my daughter’s). They quickly figured out that each insignia had a word and number on the back. When they put the words together in the correct order, the location of the last insignia was revealed.

It was a labor of love (it took me nearly a month to finish it), but my daughter has greatly enjoyed reading her one-of-a-kind comic book again and again. She particularly likes the fact that the villain is her dad (or his evil twin, which is what we told all the kids at the party). I had my husband pose in a gold sparkly mask and cape for nearly an hour one morning while I worked out the hiding spots for each insignia. He’s such a good sport!

Super-Mom to the Rescue!

When I said earlier that I became versed in all things Justice League during this party planning period, I wasn’t kidding. When I took my daughter to our local party supply store to pick up some plates and cups, she pointed to a package of Spiderman cups and asked if we could get them for her party. Without skipping a beat, I replied, “No, honey, Spiderman is Marvel. You’re having a DC party.” I know; I was just as shocked as you are! The things we do for our children…

I hope you’re inspired by these Superhero party ideas. Most of the photos above are linked to their original sources (unless they’re mine), so be sure to click on those and check them out. Below are some additional party supplies you may find appealing (these are affiliate products, and I receive a small commission for any items you purchase through these links). Feel free to contact me with any questions or comments.